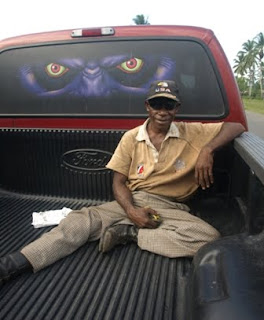 Popondetta; the Provincial Capital of the Oro Province and just quietly, its kinda stuck between a rock and hard place. I mean, I liked the place but it has a tough life ahead of it.

Here's how I saw it. Popondetta is a tough neighbourhood; I did quite a bit of solo travelling in PNG and I wandered around freely in many towns with the locals all telling me that "Nah, there's no raskols here" but in Popondetta, all the locals were saying "Take Care, Popondetta is full of raskols". This didn't stop me though, I wandered around the town and had no dramas, so I don't know what the fuss is about.

Popondetta; it's not on the coast so it doesn't have a huge ex-pat community, it's not Kokoda, so it doesn't get a huge influx of tourists, Cyclone Guba smashed all the bridges in the Province so road travel is a bit hit and miss, the Oil Palm doesn't seem to be as fruitful as those in New Britain and it doesn't look like the LNG project is going to be of any benefit to this part of PNG. The only thing that looked like it was going well was Betel Nut. Boy did I see a heap of that going on board a chartered Airlines PNG flight to Moresby! Street value was between K40,000 to K50,000 worth! Whoo oooh!

There's a problem here and it stems from the management of this Province, while I was in Oro, the LLG at Kokoda were being stifled for funds from Big Brother Popondetta because of Jealousies; that evil which permeates PNG culture. Kokoda gets all the international fan fare because of the track and it gets all of the tourists, yet the PLG based in Pop are unlikely to help progress Kokoda yet there is little reason to develop the Provincial Capital. What is the future for Popondetta? And I haven't even mentioned the other big Tourist Drawcard for Oro and that is the spectacular Tufi fjords. 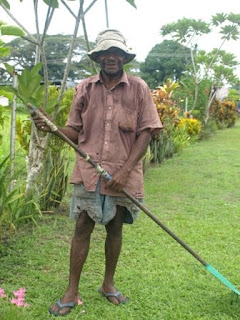 So these pictures represent the people I met and worked with, chatted to and enjoyed a few stories during my visits to Popondetta. Nicky was a chap who cleaned up the Popondetta Memorial, which comprised of a collection of Battlefield Memorial Plaques that honour the role and sacrifice made by the Australian Soldiers during WW2 in the Oro region. Nicky and his mate John Billy were happy go lucky blokes who sat and chatted with me for a while, when I chose to visit the Memorial site one afternoon. 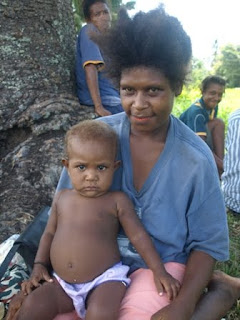 The lady and her baby were sitting under a nearby raintree just telling stories and chewing Betelnut with her friends; and they enjoyed chatting to the white guy. It was someone in this group who explained to me that the way the police allegedly deal with raskols in Popondetta was to knee-cap them, often resulting in the loss of a leg below the knee. It was after hearing this that I then started to notice so many young men in Popondetta were on crutches and only having one and a half legs! Oh dear.

In fact, there was prohibition on the sale of alcohol in Popondetta, after the Guba Flooding and a PLG election; the prohibition was lifted on the very day I flew into town. By 9am that morning, everyone was drunk, I saw SP bottles being launched out of a Police Car, I saw the recently elected PLG staff dancing drunkly with each other at the Hotel Lamington and I saw home brew sales decrease dramatically. What a wild night that was!

The future of Popondetta? I don't know... but what a ride... 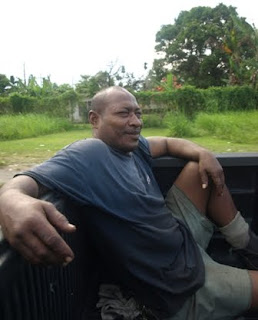 derstHow sad to read this. We lived there 1968-1971. A charming well run town and Province. The last District Commissioner is still with us and deeply sad to read of these troubles.

Dear Anonymous, it is sad to see how certain localities in PNG have fared since Independence, and it saddens me to hear that the last DC was saddened by my comments.

I don't know if there is a light at the end of the tunnel for places like Vanimo, Wewak, Alotau, Kerema or Popondetta... supposedly the GST that the Provinces raise are meant to return to the Provinces, but unfortunately, public and tourist spending is minimal.

G'day Curt, I am sorry I do not know of this chap you mention. I hope you can sort these problems out.

Hi, Im a medical student in the north of england and would love to volunteer in a hospital in PNG this summer, Ive recently made contact with a hospial in PNG who seem very keen to teach and well organized, however I fear that it may be too dangerous for me (23 yr old female) to stay there for 4 weeks on her own ? any advice?

Your main concern is how secure is the accommodation that you will be staying in. And how you plan you travel whilst in country.

My father, now 95 years old, served during WWII as a medic at a medical station at Oro Bay. We traveled to Popondetta in 1995. We were warned of the dangers and we were nervous while we were there, but a family took us under their wing and watched out for us. They took us to Oro Bay. It helped my father tremendously. I would love to go back, but only with an organized WWII tour.